Today has been another full day. We enjoyed some family worship / devotional time together to begin our day. I love hearing my kids articulate their faith at such a young age. Today as we were talking, it became evident to me that all three of them have been uniquely fashioned with perspective and thoughts and hearts that are so different and yet so complimentary. Sometimes you get the sense that some parents are merely tolerating their kids. I’m glad that I’m able to enjoy the relationships I have with ours. They’re some of my favorite people in the world and this vacation has been such a blast so far.

One of the things we wanted to do here in Minneapolis was visit Minnehaha Falls, a 53 foot waterfall located in Minnehaha Park in the city limits. The falls were pretty impressive; apparently the recent rain / flooding put the water at peak level. In fact, we heard that just a couple of days ago, some guy kayaked over the falls!

After spending a little time at the park, we headed downtown to another park, Target Field. It’ll take me a few days to properly process the day, but Target Field gets major thumbs up from me. Parking was a cinch with a garage located directly across the stadium and easy access from both ground level and skywalk. (In addition, major points for building a parking garage that exits directly onto the Interstate. Somebody engineered that puppy the right way.) The exterior to the stadium is neat and clean with a sleek modern look. As we were walking up, I noticed the banners of some all-time Twins greats. Inside, the concourses were immaculate, a lot like Disney in the sense that every 15-20 foot you’d find a person with a broom and a handled-dustpan sweeping up any trash. The field itself was pretty impressive, too, with some great nostalgic touches meshed with a state-of-the-art scoreboard / jumbotron. We sat in the nosebleeds, but we still had an awesome skyline view of downtown. And the covered canopy for the upper deck has to be the largest one in the majors. I also really loved the OF seating; very creative. All in all, this might be one of my favorite stadiums I’ve visited. Definitely in the top 5. 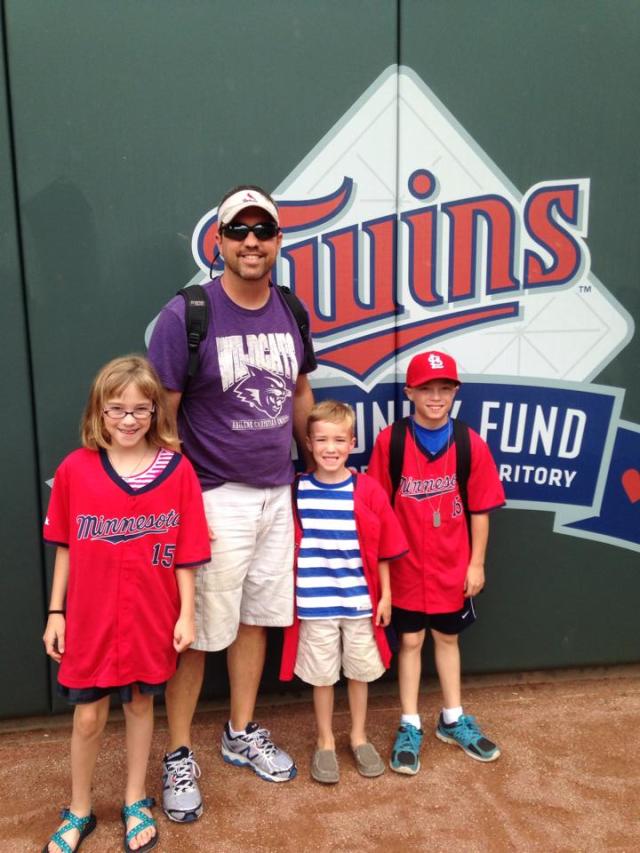 Today’s promotion was a free kids jersey to the first 5,000 fans age 14 and younger. Our kids were pretty excited to get some free Twins gear. After watching the home team take it on the chin in our previous stops, it was nice to witness a Twins victory today. Afterward, we were able to get down on the field and the kids had the chance to run the bases. It was definitely a cool experience for them. And speaking of cool, today’s temperature was actually a little on the chilly side! I’m loving the weather here!

We finished the day off by stopping again at the Mall of America to look around and ride some rides. Here’s a shot of the guys riding the log ride.

Back in my day, we called it the Flume Zoom