In 1988, I was in the 6th grade. One of my best friends, Michael Miller, was a huge Dodgers fan. His Dad grew up in L.A. or something, so he’d been a Dodger fan since birth. As a Cardinal fan, I didn’t have any particular love for the Dodgers; in fact, I could bother my buddy by dropping a single word into any conversation:

Worked every time. (If you don’t understand that reference, you should probably stop reading right now.)

Anyway, Michael was just adamant that the Dodgers were going to win the World Series that year. After squeaking past the heavily favored Mets in seven games (thanks to the dominant pitching of NLCS MVP Orel Hershiser), everyone pretty much expected the Dodgers to run out of steam against the superhuman Oakland Athletics. The A’s won 104 regular season games, swept the Red Sox in the ALCS, and pretty much looked like a collection of WWF meatheads against Hershiser’s bookish Dodgers. Everyone figured the A’s would rout the Dodgers, myself included.

Michael Miller, on the other hand, remained unconvinced. I pointed out how the A’s were loaded with pitching: Dave Stewart, Bob Welch, and Storm Davis each won 16 or more games. I pointed that the A’s were also a superior offensive team, buoyed by Jose Canseco, the AL MVP and baseball’s first 40/40 HR/SB threat. I pointed out that the A’s also had the best closer in the game in Dennis Eckersley, a journeyman starting pitcher whose career found new life in the back of the Oakland bullpen. “If the A’s have a lead late, Eckersley will shut down the weak Dodger lineup,” I told my incredulous friend.

You can imagine, then, my disbelief when Kirk Gibson achieved the unthinkable by taking Eck deep in the bottom of the ninth inning in Game 1 to win the game for the Dodgers. Gibson, the NL MVP, had been hobbled for most of the postseason with leg injuries and could barely even walk. Following an improbable base on balls to Mike Davis, Gibson entered the game as a pinch hitter. Stepping into the batter’s box, stepping into baseball immortality, Gibson lifted a 3-2 backdoor slider over the right field wall for a Dodgers victory. 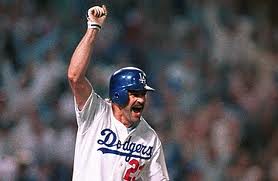 Jack Buck couldn’t believe what he just saw. Neither could I.

As soon as the ball landed in the bleachers, our telephone rang. My Mom answered and then handed the phone to me. “Who is it?” I asked. She didn’t know.

After saying hello, all I could hear on the other line was a cacophonous noise that sounded like a cat being put through a blender. I promptly hung up the phone to go back to the television. The phone rang again and when I answered, my friend Michael was on the other end. “Why did you hang up on me?” he asked.

“Shut up,” I told him and hung up the phone again.

1988 was the last time I rooted for an American League team to win the World Series. I would, however, have to reconsider if the Cubs ever made it there again.