The Story: And the Rains Came Down

Noah and the ark

The story of Noah and the ark is one that many of us have heard our whole lives. I can still picture the flannel-graph my teacher would use in Sunday School, a picture of Noah standing outside the ark, pairs of animals boarding in a single file line.

It’s interesting that there are no flannel-graph pictures of the actual Flood. No raindrops. No rising water. No drowning people or animals. We always fast-tracked that part so we could get to the ending with the dove and the rainbow.

The reality is that the Flood is a gruesome story. When we really stop to think about it, we might reconsider using Noah as the poster boy for our next Vacation Bible School.

Do you remember Michael Vick? Do you remember the public outcry when the truth came out about the role he played in that underground dog-fighting ring? Vick was absolutely crushed in the media. But as horrifying as the Vick story was, the Flood account raises the bar a hundred-fold. The loss of animal life here is extreme. Only a handful of animals survive. And the Bible says this is not the work of a sadistic “animal hater”. It is the work of God Almighty.

And that’s to say nothing of the incredible loss of human life here. Only one family survives the deluge. Is gopher wood thick enough to block out sound? Can gopher wood absorb the drowning screams of nearly every person you know? I don’t know. Only Noah can answer that one for us.

I’ll ask again: why exactly do we tell this one to our children?

When Adam and Eve were expelled from the Garden, they took the fruit of their disobedience with them. Beginning of the Noah story shows the far-reaching effects of sin in the world. In Genesis 4:7, God says that sin is crouching at the doorstep. By the time we get to Genesis 6, sin has kicked down the door and taken over the whole house.

And the Bible says God regrets making humanity; He is grieved, deeply troubled in His heart.

That’s a word you never want to hear in connection to you and God.

It might be odd for us to think of God “regretting” something. But the Biblical writer is clear. Things aren’t going according to plan. God has patiently tolerated sin until He can take it no more. He regrets that He’s made humanity.

So God decides to “uncreate”, choosing to destroy all flesh on the earth (Gen. 6:18, “Everything that is one the earth shall die.”) The Flood is like a cosmic “do over”, God taking the Etch-A-Sketch and shaking away what was previously drawn there. The Flood is destructive, a great undoing of what God had fashioned in creation.

But even with these words of judgment, there is hope. One man, Noah, is said to be righteous in his day (Gen. 6:9). And Noah finds favor in the eyes of the LORD.

God regrets making humanity, but He can’t just wipe them out. Why? Because He made a promise, a promise we looked at last week: Gen. 3:15, the promise of redemption and hope. Someday the woman’s offspring will crush the head of the serpent even as the serpent strikes at his heel. One commentator has noted that in Gen. 3:15, God is declaring war on Satan and evil, refusing to let them have the last word.

So even though sin has run of the store, God chooses to purge the earth of wickedness, delivering Noah and his family as fulfillment of His earlier promise. In the Flood, we find the first allusion to cleansing through immersion. God could have easily chosen a variety of means if He simply intended to bring destruction to the earth. But in the Flood, God chooses to put to death an old way of being and bring to life a new world, a new possibility.

We might say the Flood was an enormous purifying bath, purging the world so something else could exist, something mentioned in Genesis 6:18: I will establish my covenant with you.

The word “covenant” occurs 286 times in the OT. If you’re looking for major themes in Scripture, this is one of them. A covenant is a commitment, a pledge of loyalty and fidelity. And the first of these 286 occurrences is found here in the Noah story.

It’s worth noting that God is the one who initiates this covenant with Noah. Both prior to and following the Flood, God uses the language of covenant as a way of fulfilling His earlier promise.

And so the rains came down…

Prior to the Flood, God regretted His decision to make humanity.

But after the Flood, God remembered His promise to one righteous man.

In Noah, we have one who is declared righteous, a man of deep faith who enters into covenant with God and experiences salvation.

As we will see in the coming weeks, covenant is God’s pattern for dealing with humanity. In Abraham, we will also see one who will believe God and it will be credited to him as righteousness (Gen. 15:6; Romans 4). And God’s covenant with Abraham will provide the basis for our understanding of Jesus and the New Covenant He inaugurates through His death and resurrection.

As a sign of this covenant, God establishes the rainbow in the sky. 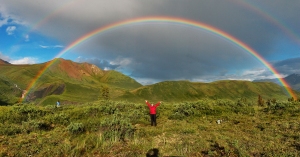 With the rainbow, God has moved from regretting to remembering. God says the rainbow is there to remind Him of His promise — not just to Noah, but to all creation. As Gary said last week, God never gives up on His creation. The rainbow is God’s reminder of this.

And at the end of the Story, John catches a glimpse of heaven, the throne of God. And what we see here should come as no surprise:

Revelation 4:2-3, “At once I was in the Spirit, and there before me was a throne in heaven with someone sitting on it. And the one who sat there had the appearance of jasper and carnelian. A rainbow, resembling an emerald, encircled the throne.”

According to John, there’s a rainbow in heaven, hanging above the heavenly throne as a constant reminder of God’s covenant love for His creation.

God never gives up on His creation.

In heaven, He has a constant reminder of this promise.

And that’s a story worth telling to our children.

This entry was posted in Devotional, Faith, God, Scripture, The Story and tagged Covenant, Michael Vick, Noah, Rainbow, The ark, The Flood. Bookmark the permalink.