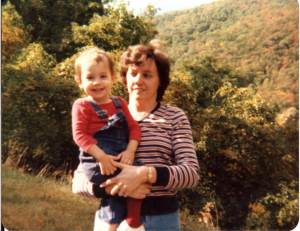 Over the years, I’ve written quite a few tributes to my mother on this blog, most of them on Mother’s Day or on this date, the anniversary of her death.

Nineteen years ago, my mother journeyed from one life to another, bearing the promise of Jesus that death never has the final word for people of faith.

I wrote this 7 years ago on Mother’s Day. It is a truthful reflection of where my heart and mind are today.

When I was 15 years old, my mother and I signed up to work the nursery at church on Sunday mornings during the summer. It was a job she and I had done together several times. She enjoyed it more than I did, but I think it helped her to stay busy, especially after my father died.

I remember one Sunday morning in particular. A lady in the church came to pick up her child and as I handed their diaper bag to her, she looked at me and said, “Jason, you’re looking just like your mother.”

I turned red with embarrassment. There are fewer things a 15-year-old boy wants to hear than how much he resembles his mother. Since my father’s death 5 years earlier, I desperately wanted people to see him in me. As much as I loved my mother, I fiercely clung to my father’s image. He was the one I wanted to look like, talk like, act like. Being told I looked like my mother was terrible. I considered the comment an affront to my manhood. The truth is I didn’t want to look like my mother.

Fast forward another 15 years to my niece’s baptism. Sunny and I returned to Lebanon to be there as Hope, my sister’s daughter, was baptized. Afterward, as we were standing around talking with people, a dear sweet lady approached me, a friend of the family I’d not seen in years. After introducing her to Sunny and the kids, she looked right at me and said, “Jason, you look just like your mother.“

Her comment caught me off-guard. It’s been over 12 years since my mother passed away. I don’t live in my home town anymore and I’m very rarely around anyone who even knew my mother. I can’t remember the last time someone mentioned either of my parents in conversation with me. But her comment nearly brought me to tears. It’s not so much that I think she’s right (I actually don’t think I look much like my mother at all). I guess it just meant a lot to me to hear someone remember my mother. Today, I consider it a supreme compliment to be compared to my mother.

She taught me about compassion and faith, love for God and love for others.

She said, “When life gives you lemons, make lemonade,” a pithy saying when spoken tritely…a powerful testimony when lived out through adversity.

She saw the potential in me when others only saw an angry young man.

If she were still here, there are so many things I would say to her on this Mother’s Day.

Mom, because of you, I know how to love other people.

Because of you, I know how to deal with adversity with strength and dignity.

Because of you, I have great respect for those who would be mothers.

Because of you, I know Jesus.

On this Mother’s Day, know that you are remembered. I cherish the person you were; I cherish who you are even now to me.

If I bear any semblance to you, Mom, I’m the lucky one. I love you.
Jason

This entry was posted in Blessings, Family, Mom. Bookmark the permalink.