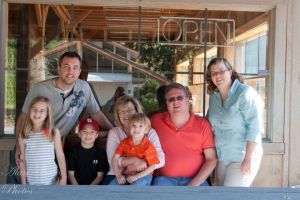 A few years ago, I wrote about my respect and appreciation for my father-in-law, Alan Shates. In that blog post, I recounted the story of our twins who spent time in the neonatal intensive care unit (NICU) after being born seven weeks premature. My oldest son, Joshua, spent 31 days in the NICU and it was by far the worst month of my life. In a particularly difficult moment, Alan encouraged me not to waver but to stand strong in my faith. “I don’t know why things happen like they do,” he said, “but I know this: God’s gonna take care of this little guy.”

Alan was right. God did take care of Joshua. And I learned something about Alan that day. I learned of his deep reservoir of faith that always sustained him through difficulty. This was more than pithy bumper sticker theology. This was well worn, road tested advice from a quiet, humble man of faith. Outside that little neonatal isolette, Alan and I cried together for the first time. Unfortunately, it would not be the last.

“God’s gonna take care of this little guy.” I’ve thought of those words often over the last 22 months since Alan was diagnosed with Amyotrophic Lateral Sclerosis, also known as Lou Gehrig’s disease. I’ve thought of those words because they’ve been expressive of Alan’s faith in a God who keeps His promises. The unwavering rock of trust who encouraged me to hold fast on that NICU floor proved to be more than a preacher. He was a practitioner. His enduring legacy is one of strength in the face of the insurmountable.

There is no cure for ALS.

There is only faith in One who has the last word.

Alan always believed that God would take care of him, either in this life or the next. He always told me, “God has a plan for me, and I’m okay with that plan.” Of course, he was hopeful that he would have many years left to enjoy with his family. Alan had a fighting spirit in him and he was prepared to give ALS a good fight. But even in the event that things didn’t go the way he wanted, he trusted that God would take care of him. Either way, he told me repeatedly, “I’m going to finish strong.”

As his illness progressed, Alan gradually lost the ability to do small things: open bottles, tighten screws, etc. Then came the walker and the wheelchair. Even as I write this, I think back to some of the worst things I know Alan had to live through over the past 22 months. I once thought the worst thing about ALS was that it robbed you of your muscular function. Now I know that’s not true. The worst thing it takes is your dignity.

But here’s why I write this: I want to remember Alan’s unbreakable spirit to the very end. When he’d stumble and I’d have to catch him…or when we’d end up belly to belly as I’d be helping him off the sofa…he’d just smile and laugh and say, “Well, I never thought I’d be this close to my son-in-law!” And we’d just laugh, because what else can you do? But I knew there was something else going on. Our laughter was our own subversive way of saying, “This disease does not rob me of who I am.” He retained his playful spirit and that mischievous smile until the very end. I absolutely love that.

Toward the end, I made a point to tell Alan that he was the toughest man I’d ever known. I’d thought it for a while, but the thought crystallized sometime in the last year as I witnessed firsthand his strength of spirit as his physical life was drawing to an end. He never wavered. He never doubted. He never ranted and raved and stomped his foot. Lesser men would’ve folded. Not Alan Shates. He finished strong.

The last night of Alan’s life, I drew near to his bedside and we had our final talk. And I had the chance to tell him something he already knew, to remind him of the truth he shared with me all those years ago. “God’s gonna take care of this little guy.” I read him a few passages of Scripture: Psalm 23; Revelation 21; and this one from 2 Timothy:

For I am already being poured out as a drink offering, and the time of my departure has come. I have fought the good fight, I have finished the race, I have kept the faith. Henceforth there is laid up for me the crown of righteousness, which the Lord, the righteous judge, will award to me on that Day, and not only to me but also to all who have loved his appearing. (2 Timothy 4:6-8, ESV)

A few hours later, Alan went to be with the Lord.

Today I bear witness to this: Alan Neal Shates fought the good fight. He finished the race. And he most definitely kept the faith.

You’re the toughest man I’ve ever known. And you’re my hero. Now go and claim your prize in Christ Jesus.

This entry was posted in Another Man, Eschatology, Family, God, Kids, Sunny. Bookmark the permalink.