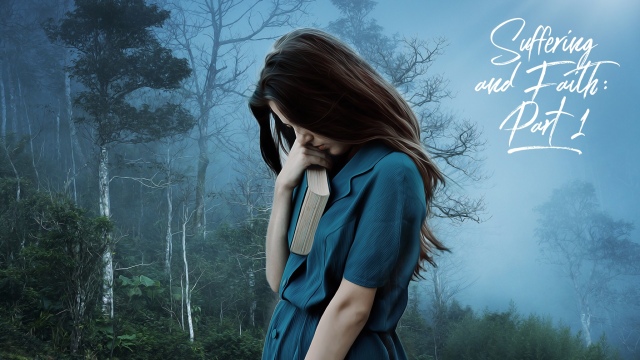 I can summarize this post in nine words. So, if you’re in a hurry, here goes:

Suffering is universally painful but God is eternally faithful.

Everyone suffers. Some more than others. And suffering usually knocks us off our feet, drives us to our knees. But through it all, God remains faithful.

Not only does that serve as a summary for this series of posts, this aptly summarizes much of my own story which has been marked by several seasons of grief. In 1987, my father passed away when I was 10 years old. My Junior year of high school, my mother passed away. Five years ago, we lost my brother-in-law, my father-in-law, and my wife’s grandfather over the course of eleven hellacious months.

When it comes to grief and suffering, I have street cred.

But I really only say that so I can say this: in my grief, God has been faithful. At times in my life, I allowed Satan to use my grief against me. I gave him a foothold in my heart because of my suffering. I posed the same question asked throughout the ages: “Why would a benevolent, good God allow me to suffer?” This led directly to a question of God’s character — questions about His goodness and love I’d been hearing about my entire life. I struggled to square the belief in an eternally good God with the reality of my unchanging — and therefore, seemingly eternal — circumstances of grief and sorrow.

Most of this took place in the wake of my mother’s death. When you bury both of your parents before your 18th birthday, you’re bound to experience a bit of existential angst and spiritual nomadism. I sure did. There was even a period there when I marched headlong out of the Kingdom and resided in that bleak shadow realm of hopelessness. I wasn’t propelled so much by doubt — which is a bit too intellectually “heavy” to describe my 17-year-old self — but by despair. I despaired not only in the deaths of my parents but also in the “death” of the God I once claimed to follow.

But eventually — over the course of several months, in one respect; but in other ways, through the ensuing years and decades, for this journey continues even today — eventually, I stopped blaming God for my suffering and I started believing that He was faithful even in my suffering, in spite of my suffering. Such realization came slowly, but it came nonetheless. And that made all the difference. Our suffering does not negate the faithfulness of God.

Over the next few posts, I want to highlight three biblical truths that have helped me in my suffering. I should say that I believe these not simply because “the Bible tells me so.” The pithy aphorisms of juvenile faith won’t bear the freight of true suffering, at least not often enough in my opinion. I understand this opens me up to the accusation of some of my brothers and sisters, that some will quietly judge this inability to simply believe “because the Bible tells me so” as an inexcusable deficiency of both faith and character, therefore dismissing all that I have to say. So be it. I’m just trying to say that I needed (and continue to need) more than pat proof-texts and pablum disguised as “answers” from those who have never truly asked questions of theodicy.

However, I have come to an even deeper belief in the reality to which the Scriptures point. I have come to believe these biblical truths because they are consistent with my experience of God. This is not to say that I cannot believe anything that is inconsistent with or foreign to my own experience. It is simply to say that I believe this consistency is what grounds these as “Scriptural truths” to begin with — the a priori reality that undergirds the textual maxim. In my experience with God, these things have been proven to be true. That is why the Bible tells me about them in the first place.

In the end, these truths point to the enduring, eternal faithfulness of God, even in the wake of our suffering.