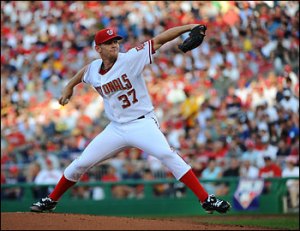 Last night something strange happened. Baseball in the nation’s capitol was relevant.

Stephen Strasburg, the much-ballyhooed precocious fireballer the Nationals drafted with the first overall pick in the 2009 amateur draft, made his major league debut last night. Facing the Pittsburgh Pirates – with what amounts to a Quad-A lineup – Strasburg demonstrated the velocity and command befitting the next big thing, walking nary a batter while striking out 14 in an impressive win.

According to ESPN, Strasburg’s arrival was also heralded by luminous phenomenon and magi from the east.

Sure, the kid had an impressive debut. And yes, the Nats desperately needed a positive night after languishing at the bottom of the NL East since their inception. (As a reminder, here’s an all-time lowlight.)

But a healthy dose of perspective is also in order. To begin with, Strasburg alone won’t be the savior of baseball in D.C. Let’s not forget that the team has an elite third baseman in Ryan Zimmerman. (It’s a travesty that Placido Polanco is besting Zimmerman at present for the starting nod on the NL All-Star Team. Come on, people!) And there are also a bevy of young players in the Nationals organization that are either on their way (Bryce Harper), recovering from injury (Jordan Zimmerman), or already helping out at the big league level (Drew Storen). And by kicking the tires on available veterans like Roy Oswalt and signing low-risk injury recovery types like Chen Ming-Wang, the Washington front office has shown a willingness to acquire more talent through a variety of different routes.

So is Strasburg the Messiah of Nationals baseball? Time will tell. But to coronate him as such undermines the hard work of a front office that has this team pointed in the right direction for the first time in the club’s history.

The Nationals’ salvation is a much more collective process.

This entry was posted in Baseball, Sports and tagged Stephen Strasburg, Washington Nationals. Bookmark the permalink.