If you spend any amount of time reading this blog, you know how much I enjoy books, music, movies, etc. For my fellow pop culture enthusiasts, I thought I’d start a monthly review of some of the best things I’m reading / watching / listening to. 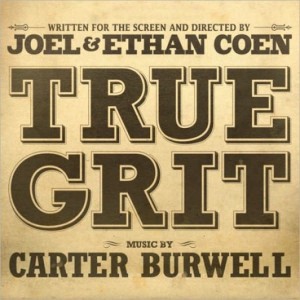 My Dad had a copy of the original True Grit film on an old VHS tape. It was one of the “Thou Shalt Not Record Over” tapes. And while he probably would still prefer John Wayne to Jeff Bridges (and VHS to DVD, for that matter), I think the Coen brothers have outdone themselves with this one. Not only is the script flawless and the casting superb; Carter Burwell’s stirring score — borrowing heavily from classic 19th century American hymns like “Leaning on the Everlasting Arms” and “What A Friend We Have In Jesus” — simply puts the film over the top. I’ve had the soundtrack on constant repeat since I saw the movie a few weeks ago. Burwell says these are the songs Mattie, the film’s protagonist, would’ve listened to “if she had time for such frivolity.” If you enjoyed the film, you’ll love the soundtrack.

On the way back from South Africa, Sunny and I saw more movies than we’ve seen in months. Most of them were forgettable (The Expendables; Grown Ups), but we were finally able to see the movie everyone’s been talking about: The Social Network or, less officially, “The Facebook Movie”. I didn’t really have any expectations going into it; most movies that are buzzed about like this one was fail to live up the hype, in my opinion. But this movie was fascinating. In case you’ve been living under a rock, there’s this thing called Facebook. It’s huge. This is the story of how it all came about. I think it’s probably a fairly spot-on commentary of the impact of the virtual online world upon our youngest generations. I see this with my kids; whether it’s a laptop or a television screen or a smart phone, reality is mediated to them through a screen. But like the depiction of Mark Zuckerberg in the film, we’re all innately wired to seek meaning and fulfillment in “real” flesh and blood relationships. Social media is at its best when it supplements, rather than replaces, quality human interaction. Whether it wins Best Picture is anybody’s guess at this point. But I suspect this will go down as one of the more important films of the decade. Rightfully so.

I love anything Scot McKnight writes. His book The Jesus Creed is one of the rare books that I actually want to re-read as soon as I finish it. (I think I’m on my third reading right now.) McKnight’s latest is entitled One.Life and the premise is simple: what does it look like to really follow Jesus? McKnight’s answers to that question continue to challenge me, but he renews for his readers a deep awareness of the radical nature of the call of Christ. McKnight takes some of our more well-worn terms — Kingdom, peace, love, forgiveness — and dusts them off, shaking off the cobwebs of neglect and the rust of misuse, before returning them to us again fresh with meaning and import for discipleship. The best thing I can say about this book is that it made me want to follow Jesus even more fully than before. A must read, in my opinion.