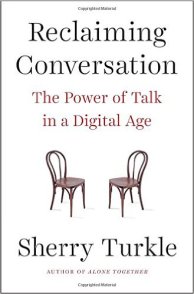 I’m currently reading Sherry Turkle’s fantastic new book, Reclaiming Conversation: The Power of Talk in a Digital Age. Turkle contends that one of the casualties of our digital infatuation is a lack of critical self-reflection. We simply don’t take time to think anymore. We’re too busy scrolling and posting and “liking.”

I’ve found Turkle’s words to be true in my own life. The appeal of these all these little handheld devices is that we never have to be bored. Any quiet moment — a moment heretofore given over to thought and contemplation — is now simply another opportunity for digital stimulation. Facebook, Twitter, Instagram, news and weather apps, games, email, ebooks, texting…with so many platforms to manage and check, who has time to sit quietly? And I’m afraid we’re raising a generation so averse to “boredom” that meditation sounds increasingly archaic, like an 8-track player of a bygone era.

All of this to say, this post is an attempt to reclaim some space for reflection.

Looking back over 2015, the year began with a mix of joy and grief. In what has become an annual tradition, I spent a week in early January with the men and women of Mission Upreach — a church-planting organization in western Honduras. Some of our best friends are committed to the mission of sharing the Good News of Jesus in this place and I always look forward to spending time with them and their fellow laborers. I also had an opportunity to make some new friends in Wyoming last January when I had the opportunity to speak at a youth rally there. I rushed home that weekend to see Joshua preach his first sermon at Mayfair on Sunday night, which was definitely a special night.

But the early part of the year was also bittersweet as we said goodbye to my sweet grandmother. She lived a long life of faithfulness and I was honored to share some words at her funeral. Her impact will long be felt in our family and we miss her greatly, but we rejoice that she finally received her reward in the Lord. 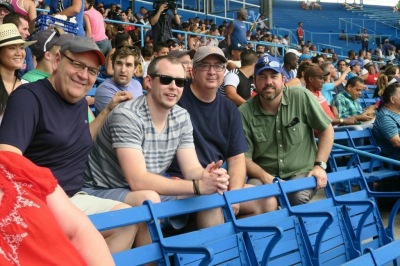 I was also fortunate to be a part of our church’s mission efforts to Cuba this past spring. For many years, Mayfair has been involved in the work of the local church in Cuba and I’m grateful that we can continue to encourage these good brothers and sisters. I spent a week there in March as part of a teaching team, encouraging and instructing preachers from across the island. Prior to our departure, I had the chance to catch a baseball game at Estadio Latinoamericano in Havana, which was epic.

One of my goals for the year was to be more physically active. I ran in my first 5K in May (the Cotton Row in Huntsville) and graduated straight to the Huntsville Half Marathon in November. Overall, I ran in 4 races this year and while I can’t say that I LOVE running just yet, it’s definitely been an important part of my year. These stats probably don’t mean much to anyone other than myself, but I tallied 200 miles running this year and 100 miles biking (courtesy of my RunTastic app). I’m looking to double those totals for 2016, which may seem a bit outlandish, but I believe in challenging myself. In fact, the discipline I’ve learned through running is a theme I hope to carry forward in the year to come.

This summer, the Bybee family traveled to Texas (where I made a presentation at the Christian Scholars Conference, hosted by my alma mater, Abilene Christian University). While we were there, we did a whirlwind tour of Dallas and Houston (including ball games at both parks) and San Antonio – which included a trip to the Alamo, which was awesome for this Tennessean! I’m so thankful for opportunities like this to travel as a family and introduce our children to the different parts of this great country of ours.

This fall brought more changes and a whirlwind of activity: Sunny started teaching a new / old grade — she returned to teaching third grade after several years of teaching first grade. The kids got off to a great start to the school year, too — Jackson is enjoying second grade, the twins are doing well in fifth grade. This fall was busy with a lot of athletic events: Joshua continued to play baseball, Jackson played his second season of soccer, and Abby Kate was a cheerleader for her school’s football team. Needless to say, we spent a lot of time on the ball field this fall, but it was great family time.

A year is so much more than these kinds of memories, though. My heart is heavy because I know this year has been difficult in many ways for many people. It seems like the prayer list continues to grow for the people I know and love. But I can also say that 2015 has been a good year. So as we close the books on one year and anticipate what is ahead in 2016, may we go forward prayerfully and humbly.

Wishing you a happy and prosperous 2016.