Tonight we closed out our vacation with a Rockies game at Coors Field in Denver. You probably already know this about us, but our family is really into baseball. As in, we’re kinda fanatical about it. In fact, we’re doing this family odyssey to see a ball game at all 30 major league stadiums. I had the chance to visit Coors Field with a good friend back in 1998, but this was the first visit for the rest of the family. So that puts Sunny up to 20 current big league stadiums; Joshua and Abby Kate are now at 11; and Jackson has been to 9 current parks. 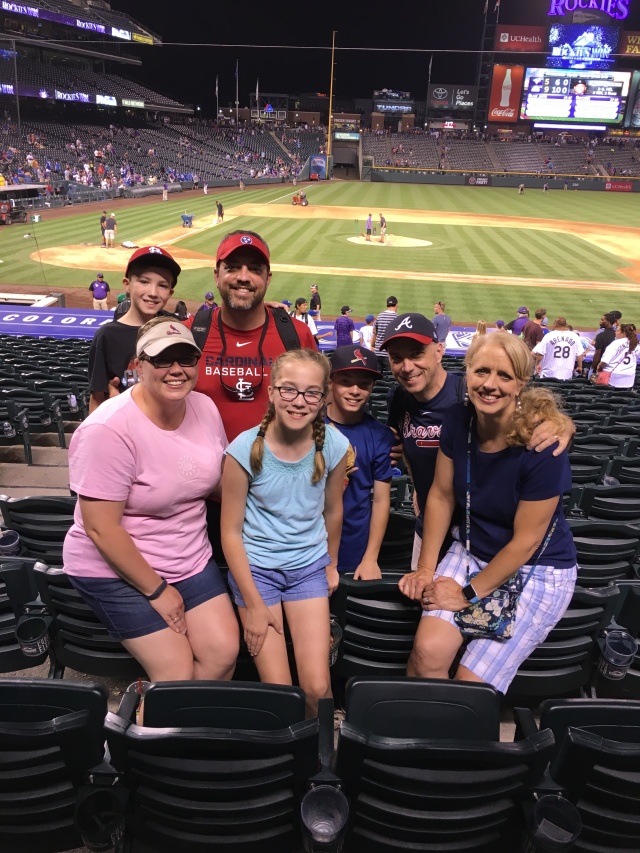 I use the MLB Ballpark app every time I go to a ball game. It has a “check in” feature that unlocks team store discounts, ticket upgrades, etc., but I love it because the app maintains a journal of your ball game experiences. For the past several years, I’ve used the app to load pictures of all our game experiences and I love looking back through the journal feature as a way of reminiscing. Anyway, I checked in and it automatically posted across all my social media platforms. Ordinarily, I don’t like doing this…and honestly, I forgot that I had that feature turned on. But in this case, I’m glad I did, because the post notified a couple of our friends that we were at tonight’s game. And wouldn’t you know it, our friends happened to be at the same game! Moreover, they were seated one section over from us! We spent the middle innings catching up with them and even had the chance to snap a group photo after the game. What a special treat!

The game was fun. We had an unexpected pitcher’s duel until about the sixth inning. After that, both offenses came alive and the runs started piling up. The Rockies took the lead on a two-run double by Nolan Arenado and held on for a 9-5 victory. But the best part of the night for us took place just as the ninth inning was about to begin.

While Jason Motte was taking his warm-up throws from the mound for the ninth inning, a nicely dressed middle-aged man walked up the aisle and leaned over to say something to Jackson. “Did you get a foul ball tonight, son?” As he asked his question, he extended his hand to reveal the white whale of professional baseball games: an official Major League baseball. Grown men have been known to revert to a latently primitive, animalistic state just to get their hands on one hit foul. And here was this nice man, just handing one over to my son.

Jackson looked up with a look of shock and surprise. “No,” he said quietly. The kind gentleman simply put the ball in Jackson’s hand and turned back up the aisle to head out. It all happened so quickly and we were all so stunned that I barely had time to shout a word of thanks. The man smiled again, offered a simple wave, and he was gone.

No more than two minutes later, a Rockies fan came bounding up the aisle and said to us, “Do you know who that guy was? The guy that gave you that ball?” Everybody looked at me; I could only shrug and say, “Uh, no.”

Rockies fan said, “That was the Rockies owner, Charlie Monfort.”

We stared at him blankly.

Rockies fan said, “With all the Cardinals gear you guys are wearing, I figured you probably didn’t know who that was.”

Mr. Monfort, I don’t know if you’ll ever read this, but just in case you do, your kindness created a priceless memory for one young nine-year-old tonight. Heck, we weren’t even wearing the “right” colors tonight — Cardinals red rather than Rockies purple — but you took the time to make one little boy feel extra special. No fanfare. No fuss. Just the sheer wonder that stirs in the heart of a little boy who rides home from the game with a ball in his hands.

Father to father, thank you.

1 Response to Out West: Rockies Game