At the July 31 trade deadline, the Oakland A’s were 25 games above .500, scoring more than 5 runs per game, and cruising toward a date with October. Having already gone “all in” by dealing prized prospect Addison Russell to the Cubs in exchange for Jeff Samardzija and Jason Hammel, everyone expected the A’s to either make a minor bench pickup or stand pat.

Instead, GM Billy Beane sought to rectify a problem that didn’t exist. In so doing, he may have wrecked his club’s best chance at his long sought after championship. 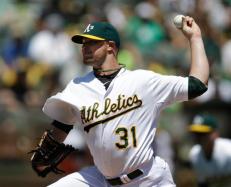 The A’s “shocked the world” by dealing clean-up hitting and laser-throwing outfielder Yoenis Cespedes to Boston to net one of the prime arms on the trade market, lefty ace Jon Lester. The deal itself wasn’t shocking; anyone that follows the game knows Beane has a reputation for big name wheeling and dealing. No, it was the content of the trade that had most people scratching their heads. “The A’s dealt away Cespedes to acquire MORE pitching?” Suddenly the A’s lineup looked a lot less intimidating. But a foursome of Lester, Samardzija, Sonny Gray and Scott Kazmir looked to steamroll the competition all the way to a title.

Then the wheels came off the bus. The A’s stopped hitting altogether; since the trade, the A’s have averaged 3.5 runs per game. Oakland sits at 10 games below .500 for August and September. The bullpen took a hit with the injury of closer Sean Doolittle. And the industry is widely divided on whether or not the Lester deal was a good one or not. As for Lester himself, he’s doing his part. Since coming over, he and Samardzija have been every bit as good as advertised. But the A’s nosedive coincided with the Angels’ recent hot streak, putting Oakland in a tie with Kansas City for the Wild Card spots.

Which would render moot all that maneuvering to acquire a stable of starters for a deep October run.

It’ll all come down to one game.

At least we know who’ll probably be pitching for the A’s.