Game 1 of the 1988 World Series pitted the Oakland A’s vs. the Los Angeles Dodgers. The A’s were heavy favorites to win the Series, having won 104 games in the regular season followed by a sweep of the Red Sox in the League Championship Series. But the key moment in the World Series occurred in the bottom of the ninth inning of Game 1. Trailing 4-3, the Dodgers had a runner on base with two outs when they sent Kirk Gibson to the plate as a pinch hitter. 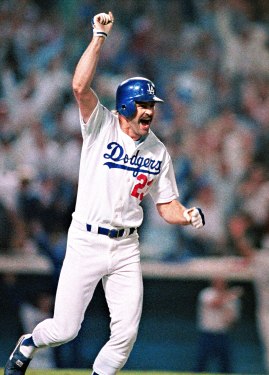 Gibson was the Dodgers’ best offensive threat, having led the team in home runs that season. But Gibson had been hobbled with leg injuries that limited him to pinch-hitting duty in the Series. So with his team down to their last at-bat, manager Tommy LaSorda sent Gibson to the plate to face the A’s relief ace, Hall of Famer Dennis Eckersley. And in storybook fashion, on a 3-2 backdoor slider, Gibson had perhaps the most memorable moment in World Series history as he homered to give the Dodgers a Game 1 victory.

As Gibson rounded third headed for home, Dodgers broadcaster Vin Scully commented, “In a year that has been so improbable, the impossible has happened!” In fact, a wider-angle replay shows the stream of cars in the parking lot exiting the stadium, no doubt Dodger fans who hoped to beat the traffic and left the game early! Every little boy dreams of this scenario in the backyard – hitting a game-winning home run in the bottom of the ninth in the World Series. But for Gibson, the dream became reality. By the time he made it back to the clubhouse, one of the Dodger coaches had tape over Gibson’s locker with the name “Roy Hobbs” written in Sharpie. Jack Buck’s call of Gibson’s home run summarizes the moment well: “Unbelievable! I don’t believe what I just saw!”

As we continue our study on Daring Faith from the Gospel of John, we’ll be exploring the connection between believing and seeing. We’re talking about the kind of faith that has eyes to see not just the improbable, but the impossible. And in our passage today from John 9, some will echo Jack Buck’s words to tragic effect: “I don’t believe what I just saw!” But I want to draw your attention to the words of a nameless figure whose testimony about Jesus could serve as an epitaph for the faithful throughout history: I was blind but now I see (John 9:25). The real question: what will we choose to see and believe?

Jesus and his disciples come across a man blind from birth. And the text says that Jesus sees him, which is an important detail. We live in a world where it’s easy to overlook people like this blind man; it’s all too easy to look past individuals who are disabled or hurting. But that’s not the case with Jesus. The text begins with this essential affirmation: Jesus sees the blind man, because Jesus always sees the overlooked and forgotten.

And the disciples ask, “Who sinned? This man or his parents?” This kind of binary thinking is rooted in a belief that suffering results from sin. The disciples assume that the man’s illness is the result of some sin, either his own (in the womb?) or his parents. But Jesus dismisses this idea, saying that this man’s blindness has occurred in order that the work of God might be displayed in his life. He goes on to say, we must do the work of him who sent me. Just as the Father sent Jesus, those who follow Jesus participate in the same work for which Jesus was sent. As a demonstration that he is the light of the world, Jesus miraculously heals the blind man. Let’s read about the healing.

Jesus rubs mud on the man’s eyes and tells him to go and wash in the Pool of Siloam, which means “sent.” This is significant: Jesus is doing the work of the one who sent him; and he sends the blind man to wash in the “Pool of the Sent.” And when this man goes back home (sent back home?) fully healed, his neighbors say, “Wait a minute? Isn’t this the blind man who used to beg for money?” And some of the people reply, “No, he just looks like that guy.”

And the whole time, the formerly blind man is saying, “No, I’m the guy! That’s me!” But his problems continue, even after he has been healed.

Some of the Jewish people of that time believed that if every Jewish person kept the Sabbath perfectly just one time, the end of the world would come. The Kingdom of God would be ushered in fully. This is helpful for us to keep in mind as we read about these “Sabbath controversies” in the Gospels. The Pharisees had good reasons for being so concerned over Sabbath observance.

But all of this is not to make excuses for the Pharisees. Their obsession with Sabbath practice that aligns with their interpretive view blinds them to what is right in front of them. When it comes to Jesus, blind people see and people who think they see are actually blind.

Note the contrast between the daring faith of the healed man and the lack of faith demonstrated by his parents. The healed man consistently dares to speak up about Jesus. V25, Whether he is a sinner or not, I don’t know. One thing I do know. I was blind but now I see! He says “I don’t know” repeatedly in this text. Where is Jesus? I don’t know. Is Jesus a sinner? I don’t know. Daring faith isn’t about having all of the answers to every question. Often times, it’s simply living with the reality that there are certain questions we can’t answer. But he says, “Here’s what I do know: I couldn’t see and now I can!” Our man here has no choice but to speak boldly about what has happened to him.

But it’s different with his parents. They are gripped with fear, not faith. They’re quick to give the “right” answer because they are afraid of being cast out of the synagogue. Literally, the word used here is “de-synagogued.” In Judaism, there were degrees of synagogue excommunication. The lightest could be declared by one person and normally lasted seven days. The next usually required three people to declare and lasted thirty days, and people were required to stay four cubits (six feet) from the banished person. The most severe form was a ban of indefinite duration; persons under this ban were to be treated as if they were dead. Because the synagogue was central to every aspect of Jewish life, to be excommunicated like this was to suffer the most severe form of isolation.

Their fear makes these parents weak, for when they are pressed, they cannot bring themselves to acknowledge Jesus as the source of their son’s healing. Imagine all the prayers they must’ve prayed for that child, praying and hoping that one day his sight would be restored. And then, when the prayer is finally answered…they can’t even bring themselves to acknowledge the one through whom the miracle came. They’re more worried about their social position than about their son. It’s as if John is saying, “Is getting kicked out of the synagogue really that awful? Wouldn’t it be worth getting kicked out of the synagogue to confess the truth that God healed your son?”

Daring faith is the counter to our fears. We see this illustrated in the contrast between the healed man and his parents.

On the other hand, the Pharisees simply refuse to see the miraculous sign right in front of them. And this is another key theme in John’s Gospel: miracles are only signs to people who are ready to see them. Last week, we talked about the crowd that Jesus miraculously fed in the wilderness. They’ve witnessed something miraculous, yet when Jesus teaches them that they must eat his flesh and drink his blood, many of them turned away. They chose not to see the truth about Jesus.

And in much the same fashion, the Pharisees refuse to see this miraculous sign: a man, blind from birth, whose sight has been fully restored. The blind man continues to say, “I was blind but now I see!” And all the while, the Pharisee is saying, “I don’t believe what I’m seeing!” The blind man’s parents are blinded by their fear of the Pharisees, fear of excommunication. The Pharisees are blinded by their fear of losing control, their fear that Jesus doesn’t play by their interpretation of “keeping the Sabbath.” But the blind man is the only one who truly sees, because as we’ll see at the end of this story, he’s the only one willing to dare faith.

When it comes to Daring Faith, seeing isn’t always believing. But believing is always seeing.

The Pharisees have the blind man thrown out of the synagogue. His crime? Telling the truth about Jesus. But there’s a final scene in the story that’s crucial.

And Jesus replies, “You have now seen him; in fact, he is the one speaking with you.” The words “you have now seen him” have double impact – the man physically sees Jesus because of his healed eyes, but more importantly, he sees spiritually because he understands Jesus as the Messiah sent from God.

The man responds in the only way he knows. He says, “Lord, I believe,” and he worships Jesus. He may have been excommunicated from the synagogue, but he has found true worship. And his life will never be the same.

When Jesus healed this man, he sent him to the Pool of Siloam, which means “sent.” This man is later sent out of the synagogue by the Pharisees, but that’s not the real sending this text points toward. No, this blind man is sent out into the world to testify to the one who restored his sight. He’s sent into the same world we’re sent into, sent with the same message of sight and belief.

To see is to be sent.

And this man’s message has become a beloved expression of the Good News in the most popular hymn in the world. May the message of the blind man be our message as well: “I was blind but now I see.”